It has been a family staple ever since.

Melt the four sticks of butter in the microwave, and then pour into a pot. Add the bacon drippings to that pot and heat on stove until all the drippings are liquefied with the butter. Then add the Worcestershire Sauce, garlic salt, and onion salt, stirring until well mixed. It is sort of a flour-less roux, and looks like a roux.

In a large (really big–see picture) roaster, mix the cereals and peanuts, and then carefully stir cereal up from the bottom as you pour the “roux” over it, so that it is all evenly mixed.

I used a large, flexible, and flat spatula so I could be sure to get all of the cereal off the bottom and bring it up.

That is Gran, my Dad, and me at a Thanksgiving on Chattington long ago.

Preheated at 325° (Fahrenheit, in case you don’t live where temperatures are based on human perception rather than what water does), bake, uncovered, for 60-75 minutes, stirring all contents from the bottom up, and from the sides in, every 15 minutes. You’ll want that spatula I described and similar to the one pictured.

You can start eating as soon as it cools enough to not burn your mouth.  If it seems “stale” then it isn’t done.  Stir and bake for another fifteen minutes.  Sometimes one hour is sufficient, otherwise 75 minutes should do. 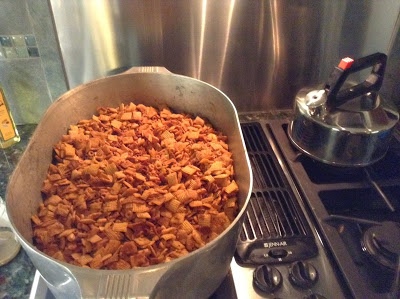 Pretzels, most use the thin stick kind.  I consider them mere “filler.”

Pecans (instead of peanuts)– my favorite and in the original version my grandmother made, but that was when we could pick them off the ground and shell them ourselves.  I have grown fond of the peanuts as a substitute.

Wheat Chex. Some throw in a box of Wheat Chex, but others find they absorb too much of the tangier flavors.  I think they are fine, but not my preference.

If you don’t have such a huge roaster, you may wish to do this in batches which fit what you have– perhaps mixing the ingredients and then splitting (before combining the roux with the cereal– mixing those only when baking).