It wasn’t an organized event, just my own way of paying respects to the soldiers who died defending Bastogne. In traveling to France and Belgium, my husband and I made a special trip to the Ardennes region, seeing Bellau Wood on the way. My husband is a prior USMC Captain, I being former USN LCDR medical corps, we have learned about the history of these battles through our military career but also books, Netflix, and the HBO show “Band of Brothers.” I had no real planned route, I just knew where I wanted to start, where I needed to end up, and freely ran where my feet decided to go.

So on the morning of 02 June 2019 I set my alarm for 5:00 am and drove from our Air BnB, leaving behind my husband to care for our two kids age 2 and 4. The summer morning fog rolled through the green hills as I weaved through sleepy little towns until 45 minutes later I pulled up to the Bastogne War Museum and Memorial.

No announcer, no balloons, no crowds, just me and my jogging hydration pack, headphones, and shirt from my deployment to Afghanistan from 2013. Turning on a Jocko Podcast I had downloaded ahead of time, I set out on my run to remember. 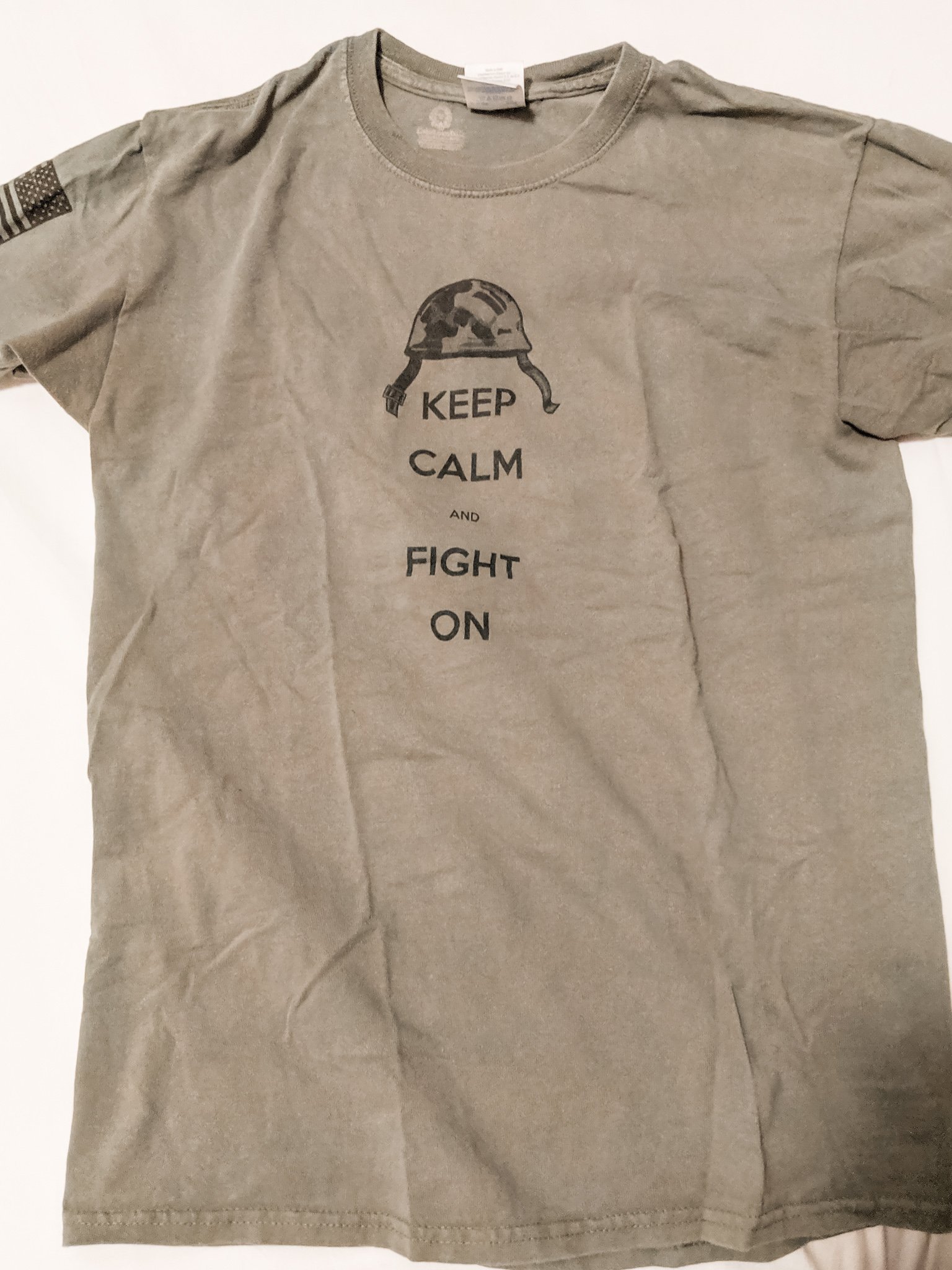 Mile 1 took me around the memorial pretty quick, then down to the city of Bastogne. Seeing the Liberty Cones for the 75th anniversary, I also passed the town plaza where we would later drink Airborne Beer out of mini “helmets.” I turned to go past the 101 Airborne Museum, which has a photo of my co-workers grandfather Frederick Becker who was 501st Parachute Infantry Regiment. I also snapped some photos at the entrance of the Bastogne Barracks which is where HQ was. Around mile 3 or 4 I’m listening to the podcast and Dick Winters talk about planning an attack on Foy. Just then, I come to a fork in the road and see a sign indicating that to the left is that same town, 5 kilometers up. Well I guess I’ll go check that out. Sometimes trusting the world and the path laid before me leads to amazing things.

By now I’ve found a path I think is for cyclists, or just some paved road that goes North West and is nice and tranquil, quiet, not crossed by many roads, and the flowers and morning sunlight are all I have to appreciate. However as I’m running, I realize this idyllic landscape was a harsh winter to many miserable men just 75 years ago. Each step I’m taking was fought for with blood and gunfire and fear and ferocity.

Suddenly a road is in front of me, and I see a memorial to my left. It’s the 506 PIR Easy Company monument. Apparently I have been running through an area hard fought for all this time. After snapping some photos, I figure I may as well see the town of Foy, so I take a left. It’s only 1.7 km, and I’m at mile 6 or so.

Now I start to see the pine trees recognizable from the TV show. Also I am listening to Jocko talk about Charles MacDonald’s book “Company Commander” where he describes running from the initial assault of Battle of the Bulge and the trees exploding over and next to him, losing his men through the brush. 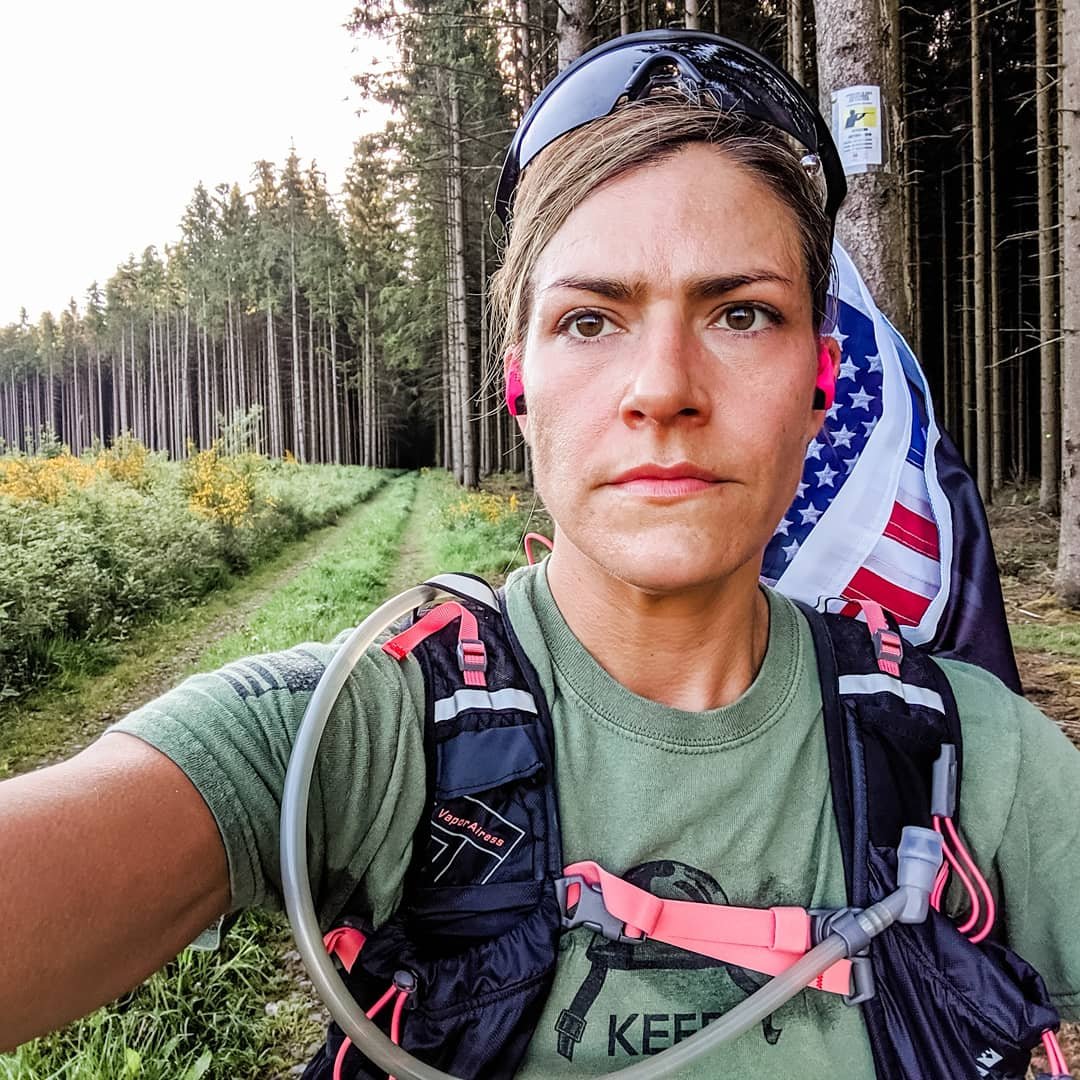 To my left now I find another memorial. I learn this is the Bois Jacques (Jaques Woods), and the memorial says this was an area of unusually heavy fighting. I run in to see what it looks like from inside the woods. Then at a clearing overlooking Foy, I see holes dug in, and I can only surmise they must be Foxholes. Later on I would take my 4 year old daughter here and tell her that people died in these Foxholes. She began to sing a soft song, and I didn’t recognize it. I asked her what she was singing, and she said it was a song for the people who died here. 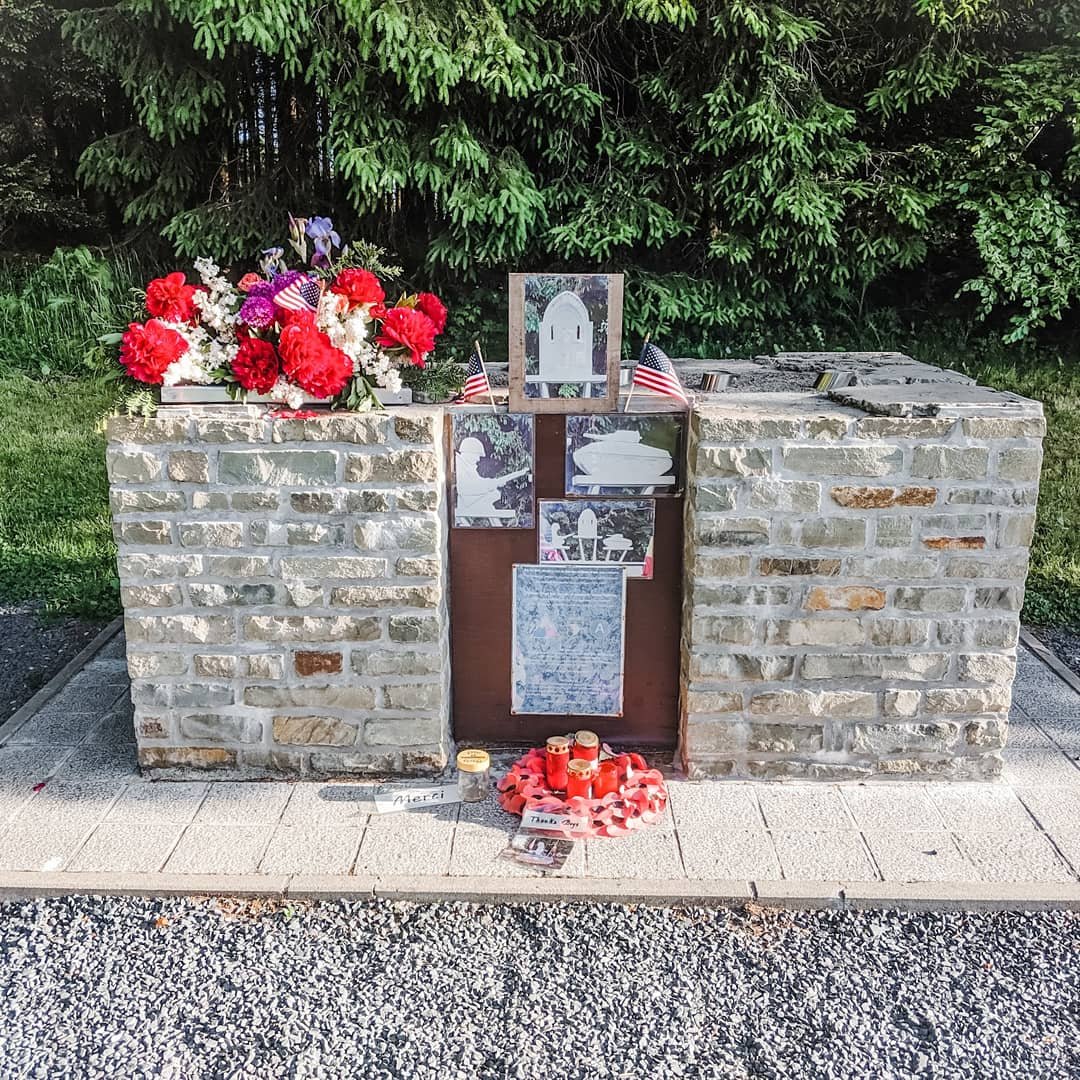 Well my heart just shattered in a million pieces and grew back stronger when she said that. I am lucky to be her mother.

Back to the morning of my run however, I continue down to Foy then head back to the memorial and north on the trail again. Now I’m at mile 8. Now I’m listening to “Memorial Day 2018″and tears start to come. My face crumples up and the gut wrenching sobbing starts. Crying, heaving breaths, out of gratitude. For all who died here as I run. All the men who will never be fathers. All the men who were fathers. A debt that can never be repaid. What I have gained from that sacrifice. I keep running as tears fall.

I’m running with an American and Belgian flag the whole run as well. I debated whether to do this. Honestly the reason is that I felt like for those men who died, if their ghosts are hanging around and turn to see this crazy combat veteran running through their battlefield, they will see the Stars and Stripes boldly held alongside the flag of the citizens oppressed by the Nazi flying high and proud and strong. A banner of freedom, one for the USA and one for the Belgian people.

So mile 8 and 9 pass, around mile 10 I beging to hear through my headphones from Jocko Podcast #67 at 4:07 “When a warrior falls… Get on your knees and praise what that man has sacrificed and acknowledge the supreme and uncorrupted Eminence of that soldier, of that warrior.” Trust me, you have to hear the whole speech to understand why, at that moment, looking back over the Eastern front of Bastogne, I dropped to my knees, and prayed. I thanked the men and their spirits and their history in that dirt under my knees and knew I had no words eloquent enough besides “Thank you.” Here now writing this I know that my words are not enough. My measly 13.1 mile run is not enough. But I can be thankful for every minute of my freedom, every moment I have with my family, every small liberty that I have, to men like this. To those who died and those who lived but still bore the scars. Who came home, but never the same.

But the world carries on and so did I. Running towards Bizory I passed a sign for the Peace Woods and lazy cows in the morning sun, now nearing 9 am. 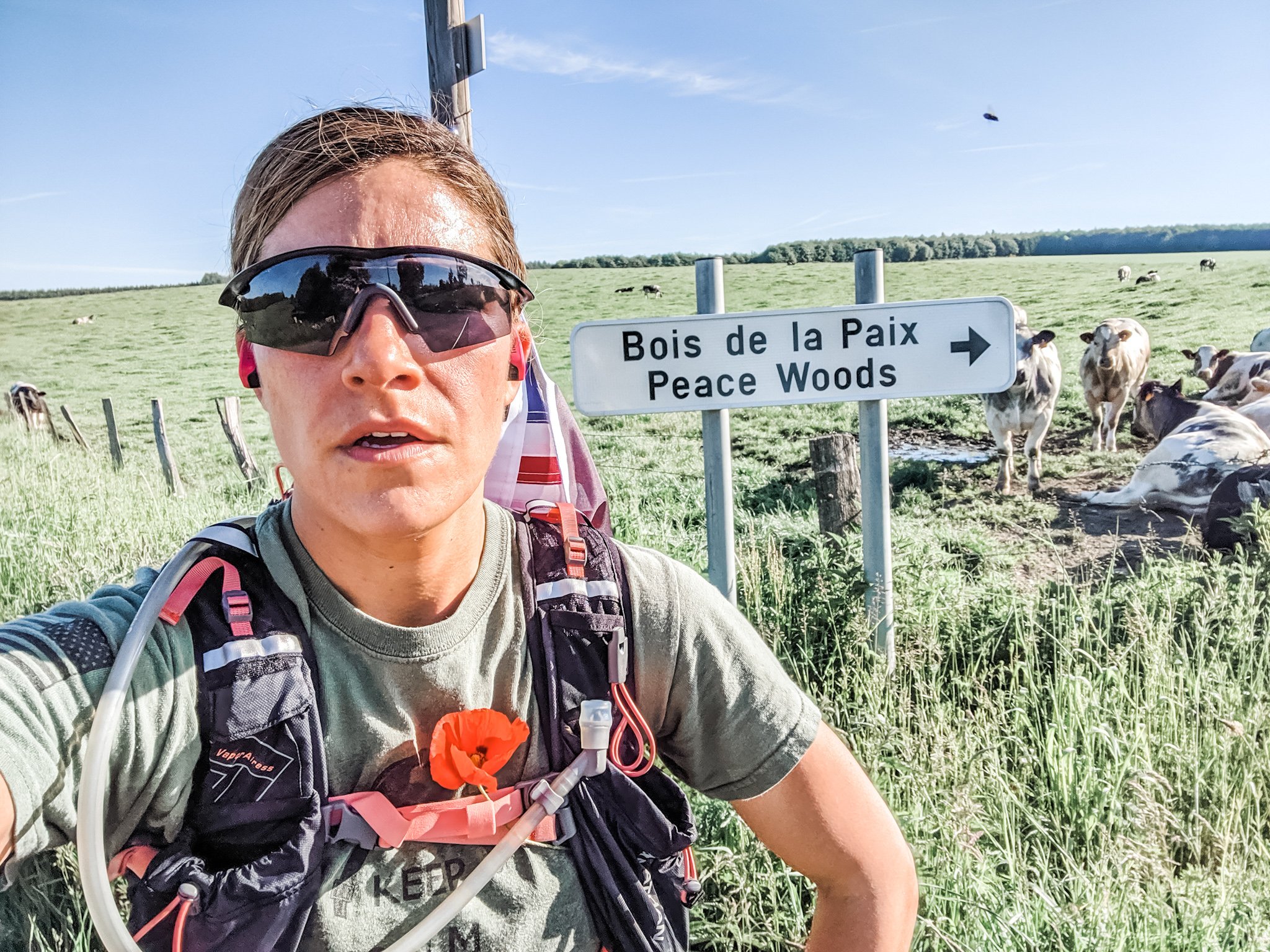 Finishing my 13.1 miles at the top of the memorial, overlooking Bastogne and the plaque to all the soldiers and the remembrances offered, I took a deep breath and appreciated it all. Each footstep, each turn that led me to the next, feeling as if guided by chance and intuition, or maybe something more, was a blessing for me to take. Each step was my prayer of thanks, each breath one of gratitude. Your sacrifice is not forgotten.