Did I title this article correctly? Or did I make a mistake because of this verse?

15 “And he said, Hearken ye, all Judah, and ye inhabitants of Jerusalem, and thou king Jehoshaphat, Thus saith the Lord unto you, Be not afraid nor dismayed by reason of this great multitude; for the battle is not yours, but God’s.”

Most people today take this out of context and make an erroneous misquote here. Although the movie “War Room” has helped to correct this error and brings more balance to this issue. The quote in 2 Chronicles was God telling them that the PHYSICAL BATTLE was the Lord’s and not their own. But there is a physical side and a spiritual side to every battle. There is a Godward side and a manward side to every victory. Looking more carefully at this passage you will notice that the King and all of his people fasted, and prayed earnestly, they cried out to God for his help. They did prayer battle before God ever did battle for them. What would have happened if they had not fasted, prayed, and cried out to God? They would have been killed, defeated, and enslaved. 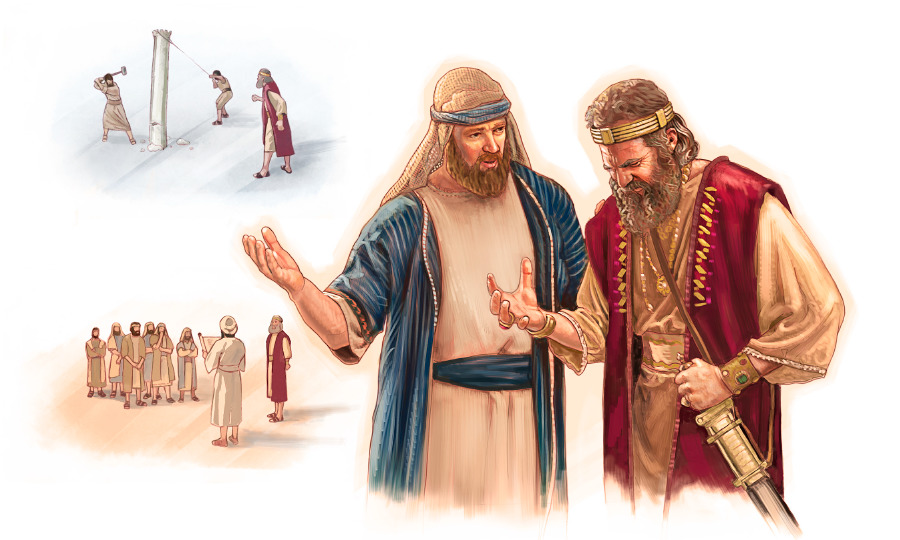 2 Then there came some that told Jehoshaphat, saying, There cometh a great multitude against thee from beyond the sea on this side Syria; and, behold, they be in Hazazontamar, which is Engedi.

3 And Jehoshaphat feared, and set himself to seek the Lord, and proclaimed a fast throughout all Judah.

4 And Judah gathered themselves together, to ask help of the Lord: even out of all the cities of Judah they came to seek the Lord.

5 And Jehoshaphat stood in the congregation of Judah and Jerusalem, in the house of the Lord, before the new court,

6 And said, O Lord God of our fathers, art not thou God in heaven? and rulest not thou over all the kingdoms of the heathen? and in thine hand is there not power and might, so that none is able to withstand thee?

7 Art not thou our God, who didst drive out the inhabitants of this land before thy people Israel, and gavest it to the seed of Abraham thy friend for ever?

8 And they dwelt therein, and have built thee a sanctuary therein for thy name, saying,

9 If, when evil cometh upon us, as the sword, judgment, or pestilence, or famine, we stand before this house, and in thy presence, (for thy name is in this house,) and cry unto thee in our affliction, then thou wilt hear and help.

10 And now, behold, the children of Ammon and Moab and mount Seir, whom thou wouldest not let Israel invade, when they came out of the land of Egypt, but they turned from them, and destroyed them not;

11 Behold, I say, how they reward us, to come to cast us out of thy possession, which thou hast given us to inherit.

12 O our God, wilt thou not judge them? for we have no might against this great company that cometh against us; neither know we what to do: but our eyes are upon thee.

13 And all Judah stood before the Lord, with their little ones, their wives, and their children.” 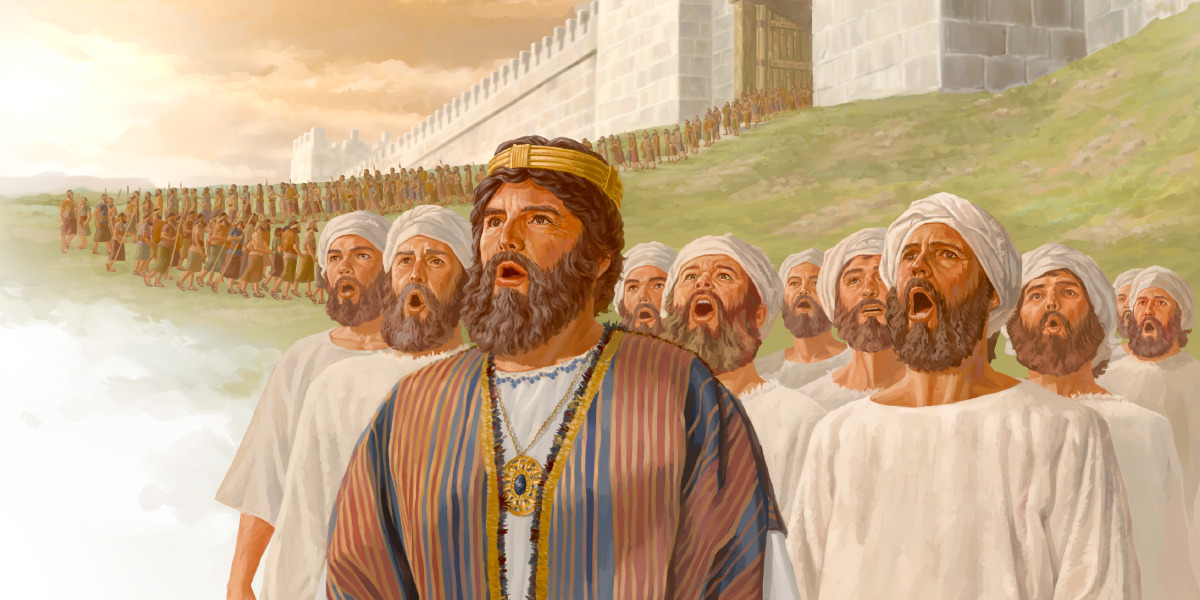 So the battle is man’s first, through prayer, fasting, and crying out to God. After doing this THEN the battle is the Lord’s. We have to do our part if we want God to do his part. Little children and babies can cry or ask for what they want, and they will get it. But as they grow they are responsible to get things, and to do things for themselves. So it is spiritually. As spiritual babies you can get other people to pray for you, and it will work. But once you have time to grow, you have to do your own praying. Today it seems that just about everybody is asking other people to pray for them. They have never learned to do their own praying. And as they have time to grow and mature, the day is coming when other people’s prayers won’t work for them any more. That is because God now by reason of time holds them responsible to do their own praying. But people today have prayer made for them, and when the answer doesn’t come they tell lies, and they slander God by saying, “I guess it wasn’t God’s will for me to have that.”

But Jesus said “If YOU ask anything in my name I will do it.” Notice he said IF YOU ASK. Not if somebody else asks for you. Now don’t get me wrong. There are times when all of us get overwhelmed by the heavy attacks of the enemy. And in those times the prayers of others are a great help, and a tremendous comfort for the afflicted ones. I have this as my own experience. But this is the EXCEPTION AND NOT THE RULE. And believe me when I say that God knows the difference. God wants a kingdom of prayer warriors and soldiers of faith. He doesn’t want or permanently put up with weak sissies. People today don’t believe what Jesus said to their own destruction. They listen to the preachers, and they believe their lies instead of the truth spoken by King Jesus.

6 “And he said unto me, It is done. I am Alpha and Omega, the beginning and the end. I will give unto him that is athirst of the fountain of the water of life freely.

7 He that overcometh shall inherit all things; and I will be his God, and he shall be my son.

8 But the fearful, and unbelieving, and the abominable, and murderers, and whoremongers, and sorcerers, and idolaters, and all liars, shall have their part in the lake which burneth with fire and brimstone: which is the second death.”

Notice that the fearful and the unbelieving – which are one and the same. For unbelievers are fearful, and the fearful are also unbelievers. People of faith do not fear. So notice carefully that the fearful, and the unbelieving shall have their part in the lake which burns with fire, and brimstone: which is the second death. Modern churches are FULL of fearful and unbelieving people. Usually more then 50% of the congregation are fearful and unbelieving. This is a sin worthy of eternal death, and punishment in the lake of fire. You can believe, and be deceived by modern preachers if you like. They will tell you that you are saved. and that all of your sins past, present, and future are all forgiven you. But if you are fearful, unbelieving, a liar, abominable, a murderer, whoremonger, sorcerer, or an idolater – then you will go to hell for all eternity. Jesus Christ has solemnly promised it here in this passage of scripture. Anyone who says otherwise is a liar and a false prophet. Believe King Jesus for he alone has the words of eternal life.

60 “Many therefore of his disciples, when they had heard this, said, This is an hard saying; who can hear it?

61 When Jesus knew in himself that his disciples murmured at it, he said unto them, Doth this offend you?

62 What and if ye shall see the Son of man ascend up where he was before?

63 It is the spirit that quickeneth; the flesh profiteth nothing: the words that I speak unto you, they are spirit, and they are life.

64 But there are some of you that believe not. For Jesus knew from the beginning who they were that believed not, and who should betray him.

65 And he said, Therefore said I unto you, that no man can come unto me, except it were given unto him of my Father.

66 From that time many of his disciples went back, and walked no more with him.

67 Then said Jesus unto the twelve, Will ye also go away?

68 Then Simon Peter answered him, Lord, to whom shall we go? thou hast the words of eternal life.

69 And we believe and are sure that thou art that Christ, the Son of the living God.

70 Jesus answered them, Have not I chosen you twelve, and one of you is a devil?

71 He spake of Judas Iscariot the son of Simon: for he it was that should betray him, being one of the twelve.”

So listen to and study the “red letter” words of King Jesus Christ. Believe them, and obey them that you may have eternal life, and the right to enter the holy city New Jerusalem. Do this while there is still time for you. Time is running out for all of us. The coming of the Lord draws near.